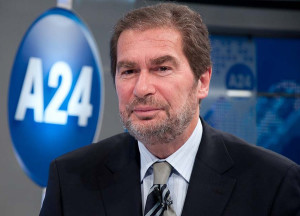 We certainly live today in a multipolar world, with the one real superpower apparently losing influence and, at the same time, being challenged by big powers like China and Russia and other regional powers, all of which aspire to assume greater roles.

Even if far-right parties do not get into power, as was the case, thank God, in Holland and France, they will influence policies of the Parties in power. This could mean more Euro‑scepticism, consolidation of groupings inside the EU, more regional agendas, וכו ', perhaps even more referenda on Euro-exits!

One has the impression that the old division of Europe (and the World) between “East” and “West” is becoming relevant again today, placing the Black Sea region on the forefront, as the only difference from the past seems to be that the meeting (או, עימות) line between the two sides in Europe has shifted somewhat to the East, in fact, to the Black Sea coastline.

Focusing on our area, the wider Black Sea region, it is unfortunate that it again seems to be one of the focal points of tension and conflict, with very weak expectations that we could perceive some ray of hope for compromise and detente in the near future.

One has only to look the latest developments in the Baltics and the wider Black Sea region, with the increase of weapons and military capabilities on both sides, איזה, given the persisting misunderstandings and phobias among the States concerned, do not augur well for the immediate future. 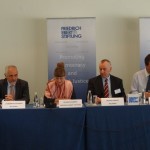 In conclusion, I believe that under today’s circumstances and if developments evolve as described above, the Black Sea region is certainly a focal point of friction and conflict, yet, at the same time and under some particular circumstances, it could also become an important factor for bridging the existing gaps. “It could become a potential key interface for a dynamic and comprehensive European-Eurasian interaction”, as my friend Mr. Pirinski says.

למרות זאת, before elaborating more on this idea, allow me to add two words on the BSEC Organization, which I have the honor to represent; BSEC tries to influence positively the situation by promoting the economic cooperation among its Members, that is, it approaches the security issue from its economic dimension.

Yet, for 25 years, the Organization was a consistent and effective vehicle of cooperation – in many sectors. We established a culture of dialogue among our Member States, as well as many networks of cooperation in various sectors. We sit around a table many times during the year, discussing and promoting projects of common interest. In a way, we already function as an initial confidence-building mechanism. This was and still is the added value of the BSEC Organization.

The overarching priority now is to tap the vast potential of the region, in terms of both social and economic development, in particular through the promotion of trans-boundary cooperation.

This is an enormous task that necessitates the involvement and support by many – if not by all! Thus, we believe that the establishment of a EU Macro-Region–Strategy, if well thought of and meticulously prepared, can prove to be a valuable vehicle to transform the BSR into a secure and stable Cooperation area.