Thinking Together Varna-2 Forum “The Black Sea: Confrontation Or Cooperation?" 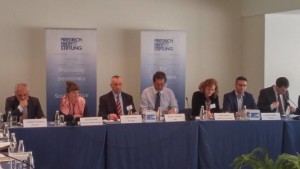 Is there an alternative to confrontation in the Black Sea region? Could a potentially eruptive region engage into the path of de-escalation of tension? Is dialogue possible between confronting states – and could a peaceful solution be found without a dialogue? Is cooperation unthinkable alongside numerous frozen – and hot – conflicts? Could the EU be a factor of stability in the Black Sea without a clear cut strategy for the region? Is there a chance that the EU macro-regional concept be applicable to the Black Sea Region? And could that be the chance for both the region and the EU?

These and many other questions were discussed at the THINKING TOGETHER VARNA-2 FORUM “THE BLACK SEA: CONFRONTATION OR COOPERATION?", which took place on May 12-14, 2017. The event was organized by the “Friedrich Ebert” Stiftung, the Solidarity Society Foundation and the Economics and International Relations Institute. It followed the 2015 first Thinking Together Varna Forum, which set the beginning of a dedicated political discussion on the challenges to and prospects of the Black Sea region developments. 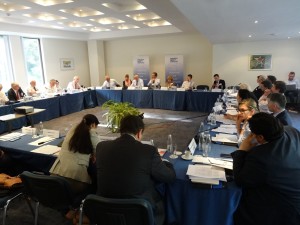 The Black Sea Space – Minefield or Pillar in the Evolving European Security Landscape?

The aim of the discussions was to examine the potential for synergies between existing sectoral programs by means of a strategy for a new generation Black Sea Macro region for sustainable development and to bring the idea to the attention of European institutions and public opinion in the BS countries. 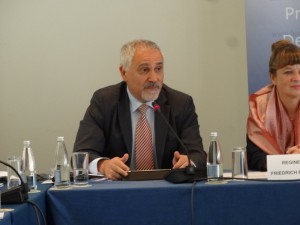 At present the Black Sea is rapidly turning into an area of growing confrontation and military build-up. This tendency however runs counter to the major potential for the sustainable development of the region due both to the underutilized resources of the BS area itself as well as in particular in light of the new strategic routs of trade and economic interaction evolving along the European/Euroatlantic-Eurasian axis.

A decade ago the EU put in place a Black Sea Synergy as a framework for a coherent approach for development of the region. At present there are a number of sectoral activities covering the Black Sea, such as the Blue economy program under the EU’s maritime policy and the Black Sea Basin format. However neither the limited results from the Synergy nor the present sectoral approach can provide the necessary framework for an overarching future-oriented strategy harnessing the significant potential for transforming the Black Sea from an area of rivalry and confrontation into a region of comprehensive and deepening cooperation.

A new initiative therefore should aim at designing an up-to-date EU strategy for the all-round development of the Black Sea as a new European Macro region as part of the overall evolution of post 2020 European Territorial Cooperation within the context of the Sustainable Development Goals paradigm.

The Black Sea Economic Cooperation (BSEC) format could be utilized as a most important format for building support by the countries of the region directly interested in such an initiative. BSEC experience and expertise no doubt represent a most valuable potential input for such an effort. The same is true for such non-governmental entities as the Conference of Peripheral and Maritime Regions, which provide the on-the-spot practical experience of cooperation between directly interested stakeholders.

The upcoming presidencies of the Council by Bulgaria in the first half of 2018 and by Romania a year later offer an opportunity for the two countries to elaborate and put in place a new strategy for the Black Sea in line with the general evolution of the Union’s 2030 policy horizon in order to ensure best-use of EU resources by targeting them towards the achievement of clear and measurable long-term goals.

Basing themselves on the overall assessment of current processes and developments in the region the Conclusions, adopted by Farna-2 Forum underline, that the experience accumulated over the years by BSR countries, particularly in implementing the EU Synergy Initiative and the BSEC projects, constitutes a useful foundation for upgrading the existing formats of regional cooperation. The concept of an EU macro-region under a strategy specifically developed for the BSR could be regarded as a creative contribution to that end. In this regard the participants agreed that the 2018 Bulgarian Presidency may wish to find a suitable way to encourage the European Council to agree on a mandate for an EU macro‑region in the BSR, inviting the Commission to present a macro‑regional strategy for the Black Sea Region by June 2020 at the latest, comprehensively addressing cooperation related to infrastructure development; tourism and cultural exchange; maritime transportation; fishery management; energy supplies; controlling migration; environmental protection and climate change; regional confidence- and security-building and suitable European ‑ Eurasian economic interaction.