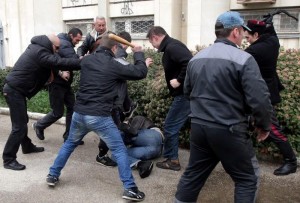 Everyone loses but not everything is lost. This seems to be the shortest and, unfortunately, the most optimistic summing-up of the current crisis in the Ukraine.

The Ukraine – down on the slope to a split

The main loser undoubtedly is the Ukraine itself: the state of the.Ukraine, struggling to preserve its integrity and statehood;  and the people of the Ukraine, who will have to heal the bleeding wounds and find a way to live together – albeit on both sides of the dividing Dnieper line.

Hardly anyone doubted, that Yanukovych and his entourage will bear the main responsibility and blame for what happened. But they dragged down the Party of the Regions, thus compromising the political representation in state institutions of the Russian-speaking population, as well as the Eastern and Southern Ukraine altogether.

It is the new government who is facing the challenges now. Changing the guard in Kiev does not simply mean coming into power, it is much more than that. It is a transfer of responsibilities. The new authorities are not just challenged with the preservation of Crimea as an integral part of the Ukraine, but first and foremost they have to deal with the re-integration of a deeply divided society. The deficit of trust is the main problem of the Ukraine today, coupled with the total disappearance of a sense of togetherness. It will be of crucial importance for the future of the country how the new government is going to handle these issues: whether they will behave like winners and look for revenge (it was Brzezinski who recently warned against such an approach) or they will engage on the road to national reconciliation. Because whenever there are victors, there are vanquished as well. The notion that the good twenty million of the population triumphed over the bad twenty million could hardly be a basis for the preservation of a unified nation in the Ukraine.

The new authorities are not politically virgin either. A large number of the currently leading figures were in government after the Orange Revolution in 2004 and their rule brought Yanukovych successfully back to power after the elections in 2010. Unfortunately during those more than twenty years of independence there was no government in the Ukraine, which did not contribute to the further division of society. And which left with a reputation of a non-corrupted one.

The new government’s own allies could turn out to be an even worse problem. The outright nationalist and anti-Semite Tyagnibok was useful in square fights, but from now on he and his Svoboda (Liberty) Party will be a rather uninviting company to Yatsenyuk and Klitschko – no matter whether Svoboda takes part in the government (thus raising uncomfortable questions both in the Ukraine and in Europe), or stays outside (taking into account the aggression it generate around itself). The fighters of the extremist Right Sector, a number of them already recruited in state security institutions, will represent an even heavier burden.

The first actions (and inactions) of the new authorities already started eroding confidence. The revision of the Law on Minority Languages is in direct contradiction to European values and recommendations. It fuels fears, that this might be a step to limiting civil rights, following the example of some Baltic countries with the “non-citizen” status of Russian-speaking population there. On the other hand the failure to independently investigate snipers, guilty of the murders in Kiev, overburdens the new government with moral suspicions and could easily discredit the cause itself that led to the mass popular protests.

From the very outset of the crisis Russia played a counterproductive game – to its own interests as well. It put all its eggs in the rather vulnerable Yanukovych’s basket and when he got the chance to strengthen his positions both in Kiev and Brussels as the flag-bearer of pro-European aspirations of his country by the single act of signing the Association Agreement with the EU, Russia forcefully and humiliatingly made him step back.

Thus a unique opportunity for making a major step towards the unification of the Ukrainian society was missed. The signing of the Agreement by a pro-Russian politician could have taken down the fears in Eastern Ukraine that it is an anti-Russian act. By the way, the current government has its mirror chance: they are the ones, who could lay a stable basis for normal Ukrainian-Russian relations, overcoming the suspicion about non-transparent interests and motives that would accompany any such policy, lead by a pro-Russian government.

Russia isolated itself. Relying on power – in the form of rhetoric, Duma decisions or concrete military actions in Crimea and in and around the Ukraine does not bring any added value to Russian politics and substantially harms the interests of the Russian-speaking population in the Ukraine. The annexation of Crimea has no chance of being recognised by the international community. Russia will keep its control on its naval bases in Crimea, it will add another neighbouring territory, part of an independent country, under its control, but Transnistria, Abkhazia, South Ossetia and now Crimea do not make Russia stronger. Rather the contrary – they make it politically and economically more vulnerable. In strategic terms Russia is about to compromise its main asset in the “near abroad” - the ethnic Russians, shifting the accent from influencing people to controlling territories.

Russia is losing channels and mechanisms for dialogue. It is damaging its reclaimed position as an influential international player, gained by its role in the negotiations with Iran and on Syria. Last but not least – its actions put a heavy question mark on the newly-acquired national self-confidence of the ordinary Russians and increase the effect of both internal and international criticism against Putin.

We, the EU – lessons not learned

We, the EU, are not innocent either. We did not find the right way to help the Ukraine stand firmly, united and on long-term basis on pro-European stance. The EU thinking gradually evolved from integrating the Ukraine to beating Russia in the Ukraine. It was Karnegie Europe in its November report of last year which warned against such an approach. Germany, France and other moderate EU states did not succeed to counter-balance the political temptation of some influential politicians in Poland, Sweden and the Baltic States to look at the Ukraine as at a battle-field in the confrontation with Russia. The dilemma-approach – either the EU or Russia, garnished with a number of additional political conditions (among which the release of Tymoshenko) strengthened the idea, spread in Eastern Ukraine, that the association to the EU is part of a geo-political struggle and an anti-Russian act, thus compromising the European cause itself. Moreover, in strategic terms the confrontation along the East-West line looks like an echo from the past and a short-sighted policy in view of the new geo-political fault lines, against which the EU and Russia would rather be forced to co-operate in the future.

The failure to abide to the provisions of the agreement between Yanukovych and the three EU foreign ministers did not raise the confidence in Europe in certain part of the Ukrainian public opinion. The EU gave extra arguments to the accusations of double standards, especially in the case with the rather shy insistence for investigation on Maidan murderers – against the background of Estonian Foreign Minister Paet’s revelations in his conversation with Catherine Ashton, that most probably the snipers had been recruited by the extremist circles among the protesters.

The EU was politically correct, but not entirely honest, talking about the integration of the Ukraine into Europe. Signing of an Association Agreement does not necessarily mean membership of the Ukraine into the EU. Turkey has such an agreement signed in 1963 and is still far away from membership. No one in the European capitals is ready to offer a European perspective (the political euphemism, replacing membership) to the Ukraine. And this is yet to be realised by the Ukrainian population – with all accompanying disappointments.

As always – there are some. In the Ukraine these are mostly the extreme nationalists – both from the West (fighting against the “moscalys”* in and outside the Ukraine) and from the East (advocating secession from the “hohols”** and accession to Russia). The list of winners might also line up some of the big oligarchs in Eastern Ukraine, who will try to literally cash in their loyalty to the new government in Kiev and their efforts to soothe (and control) some of the regions in the Russian-speaking East.

Division, confrontation and cold-war nostalgia in both Europe and Russia will also be on the winning side. This puts the whole continent at risk of a direct clash between the new revanchisms: the post-Soviet one (in the form of Russian state policy) and the post-war one (as a far-right nationalist ideology – in the Baltic states, Poland, Hungary, Romania). The fact, that both types are present in the Ukraine – and not only in Lviv or Sevastopol, does not bring additional stability and peace.

This work by Любомир Кючуков is licensed under a Creative Commons Attribution-NonCommercial 4.0 International