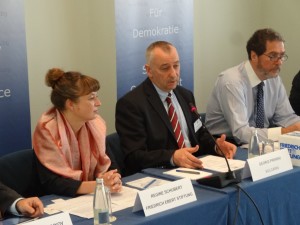 The final text of the Varna Forum 2.0’s conclusions states that “…the experience accumulated over the years by BSR countries … constitutes a useful foundation for upgrading the existing formats of regional cooperation. The concept of an EU macro-region under a strategy specifically developed for the BSR could be regarded as a creative contribution to that end.” This formulation reflects the two aspects of participants’ views expressed in the course of the discussions – on the one hand that there is sufficient ground for up-scaling Black Sea cooperation, while on the other that the project of a BS EU Macro-Region is too problematic.

Those favoring the proposal to take advantage of the upcoming Bulgarian and Romanian Council Presidencies in 2018-2019 for putting this project on the EU agenda referred to the GAC Conclusions of April 24 last regarding the issue of EU macro-regional strategies, namely that the Council: „INVITES the Commission to continue supporting the implementation of macro‑regional strategies where this brings added value, in particular in terms of strategic planning, monitoring, evaluation and communication, zatímco AGREEING that monitoring and evaluation processes should involve all relevant stakeholders; REMAINS open to examine any commonly agreed and mature initiative of Member States facing the same challenges in a defined geographic area aimed at setting up a new macro-regional strategy;’(emphasis added).

In this light, those supporting going forward with developing a MR Strategy for the Black Sea region highlighted the real added value that such a strategy would bring to a range of existing and evolving policies and practices, such as:

Those questioning the timeliness and appropriateness of the BS MRS proposition voiced considerations such as:

The VF 2.0 Conclusions end with the suggestion that “…the 2018 Bulgarian Presidency may wish to find a suitable way na encourage the European Council to agree on a mandate for an EU macro‑region in the BSR, inviting the Commission to present a macro‑regional strategy for the Black Sea Region by June 2020.”

Tím pádem, it remains to be seen which route shall prevail – the one favoring the Black Sea developing as a progressing European Macro‑Region or rather the one maintaining the present state of the region as a “European backwater”.